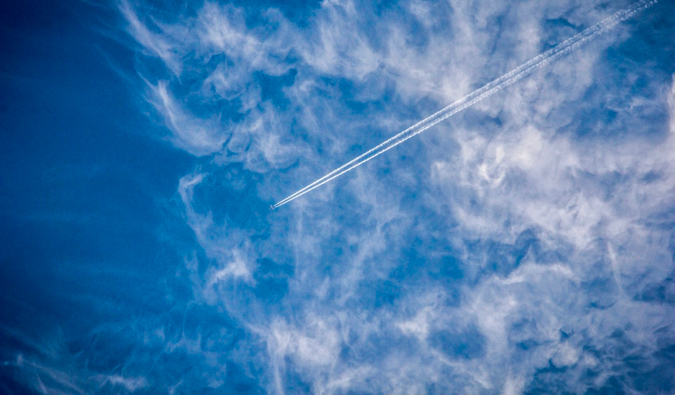 As people become more conscious of their environmental impact on the world, there’s been an increased focus on air travel — and, over the past year, a corresponding increase in “flight shaming”. The term is coined from the Swedish flygskam, which means “flight shame” i.e. you personally feel shame about flying but, unsurprisingly, it has devolved into shaming others for flying due to its carbon footprint.

But what can we do? And is focusing on this issue really the best use of our efforts? Just exactly how bad is flying really?

So, when looking at the math, flying isn’t really the worst climate offender out there. There are far worse industries out there. Shouldn’t we focus on them?

Cutting down carbon emissions from flying isn’t going to make a big dent in total emissions.

And you can’t just shut off air travel. The world economy relies on it to function. We live in a globalized economy — and benefit from that — because of air travel. Ending all flights would end our modern economy.

Moreover, there are instances where flying is required. I mean, are we going to take boats across the ocean all the time? What if we have to rush to a sick loved one’s side? Driving might take too long.

To me, it seems that we could get bigger wins elsewhere.

But I’m not a scientist. So I called one up to ask about the environmental impact of air travel.

Michael Oppenheimer is a professor at Princeton University, co-founded the Climate Action Network, and has been a leading scientist on climate change for over 30 years. He was one of the principal participants of the Intergovernmental Panel on Climate Change. He said:

If you’re a traveler, you have to worry about four things from aviation. One is just the carbon dioxide emissions…number two, you have to worry about the fact that particulate matter from jets can provide surfaces for the formation of clouds, and that that reflects some sunlight…the third thing would be…the production of tropospheric ozone [a greenhouse gas] through the emission of nitrogen oxides…and then there’s a fourth thing, which is that high-flying jets that actually enter the stratosphere can produce some…ozone, and at some altitudes, they may release particulate matter, which would encourage the destruction of ozone.

My conversation with Prof. Oppenheimer gave me pause. It’s just not our carbon footprint we need to worry about when we fly, which makes the total cost of our flights pretty bad. (But, since the carbon effect is the easiest documented, we’re going to focus on that here.) Further research showed that flying is pretty bad.

Most of the time.

While you can say that, generally speaking, flying is worse than any other mode of transportation, the science is tricky because, since there is a surprising number of variables, there’s really no good apples-to-apples comparison. Depending on the make, model, distance, and the number of passengers in your car, driving might be better — or worse — than flying. The same is true with a bus. How many passengers are on that bus?

If you’re driving alone, especially over a long distance, it might better to fly. Yet, on that same trip, if you carpool with three other people, you can get your numbers down by a fourth, making driving the better option.

So it turns out there’s no one-size-fits-all answer. You can’t say “flying is bad, never fly” because sometimes it’s better to fly.

The International Council on Clean Transportation also came to the same conclusion when they looked into it. It turns out figuring out what mode of transport is quite complicated. As you can see from their chart, no one transportation option is the best every time:

So what’s a traveler to do? I felt overwhelmed just researching this article and doing the math on all these example trips. I didn’t realize how complex this was. And, as I explain later, depending on the carbon calculate you use, your numbers can be wildly off. So what can you do? Here are some tips I learned in this process to help reduce the carbon footprint of flying:

1. Avoid short-haul flights – A report from NASA showed that about 25% of airplane emissions occur during takeoff and landing, so if you go on a lot of short-haul flights, you tend to have a higher per-pound footprint. So, flying nonstop rather than a bunch of connecting flights is the better option environmentally.

The longer the distance, the more efficient flying becomes (because cruising altitude requires less fuel than any other stage of flying). If you’re flying a short distance, consider driving or taking a train or bus instead.

2. Buy carbon offsets (or don’t actually) – Carbon offsets offer a way to balance out your pollution by investing in projects that reduce emissions of carbon dioxide or other greenhouse gases in the atmosphere. If you used one ton (2,000 pounds) of carbon, you can support a project like planting trees or clean water initiatives that would produce a saving in carbon equal to what you use (so the scale balances).

Websites such as Green-e, Gold Standard, and Cool Effect can give you a list of good projects to support.

But, while these programs help, they aren’t super effective. For example, it takes 15-35 years for trees to grow big enough to capture carbon.

And carbon offsets just shift the burden of what you’re doing to somewhere else. It’s not an actual reduction in carbon emissions; you’re just investing in something that you hope will take as much out as you put in.

In fact, in a 2017 study of offsets commissioned by the European Commission found that 85% of offset projects under the Kyoto Protocol’s Clean Development Mechanism (CDM) had failed to reduce emissions.

Much of my conversation with Prof. Oppenheimer centered on carbon offsets. He said,

Offsets are good if, and only if, they’re accountable, that is, you’re sure they’re producing the greenhouse gas benefit that they’re advertised at, and that’s sometimes hard to figure out because the emissions are not direct, they’re somewhere else…so, you want to only do offsets and count that as part of your greenhouse gas budget if they’re from an accounting system that’s comprehensive and reliable. Secondly, offsets are good if some have been designed to stimulate technological change or other changes that would not have happened so easily without the offset.

I think this is the point. Offsets don’t have strict controls, so you don’t know if they are really working. And it’s far better to force more efficiency from airlines and build up alternatives to flying in the first place. Much of my research showed that offsets, while making you feel good, aren’t as effective as fighting for reductions directly at their source.

So, you can buy them, but be really careful and do your research into the projects you’re supporting.

3. Fight for better flying – We need to put the pressure on airlines to improve fuel efficiency through new aircraft designs and operations, like implementing the usage of biofuels and planes that run on clean electricity, plus modernizing their fleets. For example, the new Dreamliner has very fuel-efficient engines that reduce CO2 emissions by about 20% in comparison to the planes it replaced. Pressure airlines and fly newer, more fuel-efficient planes when you can. Additionally, try to fly an airline that is generally fuel-efficient.

However, I want to put a big caveat here. My team and I used a lot of calculators for this article. We each found a bunch and tested them ourselves to see if our numbers matched. Like peer review scientific papers, we kept checking each other’s work. We were incredibly shocked to find out just how much variation there was between the carbon calculators. My suggestion is to use multiple calculators to find out what your exact footprint is.

Prof. Oppeniemer concurred, saying, “If the calculator shows that the car is worse, I would believe that, because all this is very sensitive to the load factor. And also…since a lot of fuel is burned on takeoff and landing, the longer the flight, you may sort of amortize the trip if you’re in an airplane.”

5. Fly less – At the end of the day, flying less is the best way to reduce your carbon footprint. Taking lots of flights a year, even if you do some of the lifestyle changes we mention below, is still going to cause your personal footprint to be huge. While the above methods will work, the best you can really do is to look for alternatives as much as possible.

I think we should all fly less. I look for ways to fly less all the time. We all need to be more aware of our carbon footprint. But it’s also important to understand, total flight emissions are small compared to other industries. There are so many factors that go into personal carbon footprints that I think we can make a bigger difference through the day-to-day actions we take since, as we’ve seen, most industries have a bigger impact on emissions! Do things like:

If you don’t fly a lot generally, the things you do every day can have a huge impact on your carbon footprint and help the environment. Let’s not lose the forest through the trees.

In today’s “cancel culture,” we’re all supposed to be perfect people — but those who cast the most stones are imperfect too.

I don’t believe in flight shaming because, when does shaming someone ever work?

When people feel like their values are attacked, they harden their positions. If you shame someone, they will just do more of the same and become entrenched in their positions. Study after study has shown this to be true.

Telling the person they are bad – when no one ever wants to think of themselves as a bad person – won’t get you anywhere.

That’s not how human psychology works.

Instead, I believe in finding and presenting alternatives.

That’s how you affect change.

If you’re worried about the environmental impact of flying, reduce your own footprint, educate your friends on why they should fly less and find alternative transportation, and contribute to some good organizations that are out there fighting for a greener world:

The world needs immediate action. And there’s a lot you can do to to help. If you want more effective change, donate to NGOs and sociopolitical groups that are pushing climate change action immediately — because the longer we wait, the worse it will get.

Fund the planting of trees.

Fast action will get you more bang for your buck than anything else.

But whatever you do, don’t shame people for flying. That’s not going to do anything.

Book Your Flight
Find a cheap flight by using Skyscanner or Momondo. They are my two favorite search engines because they search websites and airlines around the globe so you always know no stone is left unturned.

Book Your Accommodation
You can book your hostel with Hostelworld as they have the largest inventory. If you want to stay somewhere other than a hostel, use Booking.com as they consistently return the cheapest rates for guesthouses and cheap hotels.

Don’t Forget Travel Insurance
Travel insurance will protect you against illness, injury, theft, and cancellations. It’s comprehensive protection in case anything goes wrong. I never go on a trip without it as I’ve had to use it many times in the past. I’ve been using World Nomads for ten years. My favorite companies that offer the best service and value are:

Footnotes
1. There are a lot of emissions calculators out there, and many vary wildly. For flights, I went with the ICAO as it’s the most scientific. For car emissions, I used the Environmental Protection Agency (EPA).

Sources:
We did a lot of research for this post. While we linked to some in our articles, here’s some of the other sources we used for this post: